The art of Carsten Crone Caroc

I had just started out with yoga and I was practicing twice a day. Overwhelmed by the effects I needed to talk to an experienced teacher. So I called the yoga center in Stockholm and Carsten took my call, one of my first contacts with the Scandinavian Yoga & Meditation School. In a calm and friendly voice which exuded spiritual authority, he gave me valuable, practical advice that I remember to this day.

When I joined Swami Janakananda’s teacher training a couple of years later, Carsten was one of the senior aspirants. I often worked together with him and on a couple of occasions we shared living quarters. Since this time I consider him a good friend. In May 2018 I will have the pleasure of seeing him again in Paris for an exhibition of his art at Yoga & Méditation Paris.

I recently had a long conversation with him about good memories form the intense ashram years and about his journey to becoming a yoga teacher and an artist.

– What did you discover first, art or yoga ?

After high school I studied for two months at a Danish folk high school for art, it was a boarding school in the countryside outside Kalundborg. During this period, a yoga and meditation teacher trained by a disciple of Swami Satyananda taught us twice a week for six weeks. I was immediately convinced.

Back in Denmark after a journey to Australia and New Zealand, Carsten participated at a 14 day retreat at Håå course center in 1997 and then decided to do the three month sadhana course the following year. This is a rather advanced retreat where particularly deepgoing yoga techniques are revealed during 33 days of silence. That year, the course inspired several participants to stay on and train to become yoga teachers after the course. Carsten was one of them. 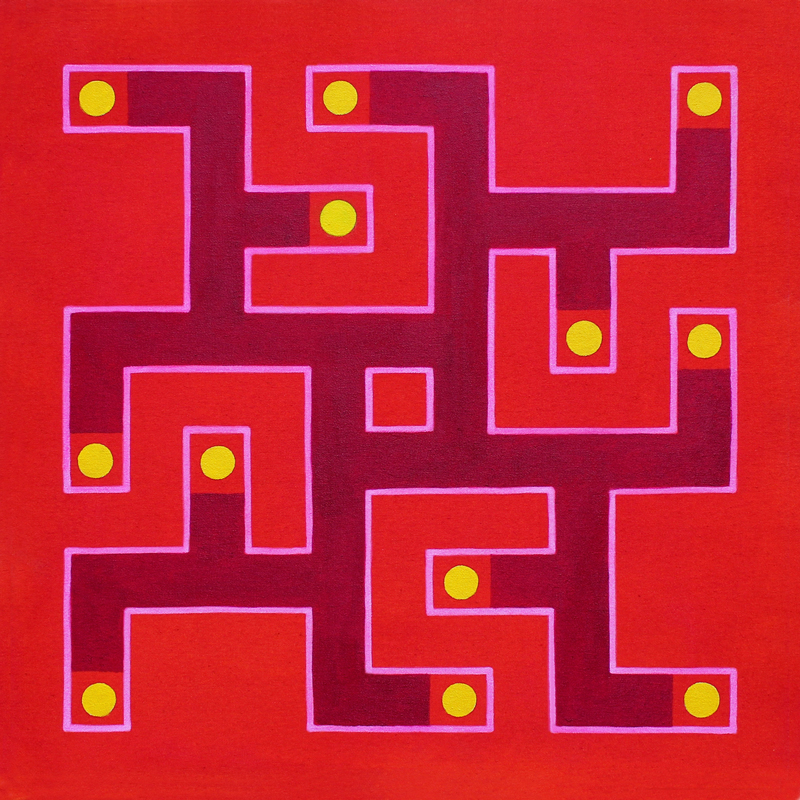 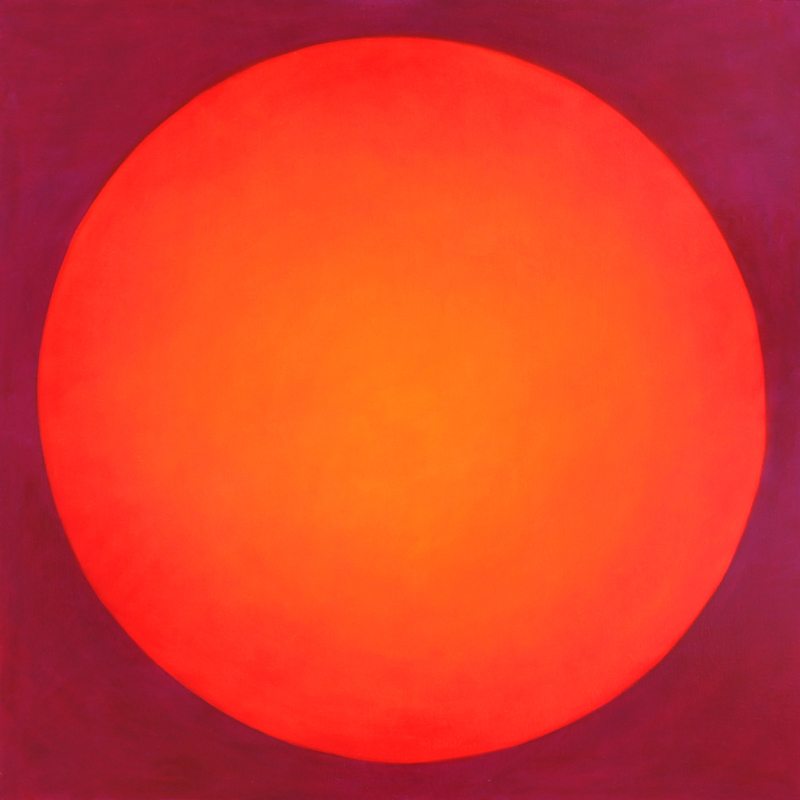 During his teacher training Carsten lived in the ashram in Stockholm, a notoriously disciplined branch of the school. Apart from learning to teach yoga and meditation the education included karma yoga, the yoga of action. Carsten was introduced to carpentry and masonry and was for some years one of the workhorses of the yoga school. When he came to the forest ashram in the south of Sweden (where I lived) for the tri annual yoga teacher seminars, I remember him constantly dressed in a work outfit with construction tools in his hands.

Our teacher, Swami Janakananda was an artist when he was young. He had several painters among his friends, Sohan Quadri and Leif Madsen are probably the most well know ones. He took pride in filling the yoga center with inspiring paintings. Many students of the school were professional or amatuer painters as well and quite a lot of their art work was hanging on the walls as well alongside with posters of Mark Rothko, Paul Klee and tantric art.

In 2004, after having completed his six years of intense training, Carsten left the school to my surprise.

-Why did you decide to leave instead of staying on as a full time yoga teacher?

There was a dream of living the life of an artist. Maybe combine it with what I had learnt from the yoga school.

I understand him. The powerful yoga we learnt from Swami Janakananda makes you aware of your deepest wishes. And it gives you the power to pursue them.

Carsten first went on a several month long journey to India. On his return he applied for The Royal Danish Academy of Fine Arts but was not admitted. He did a one year painting course and applied again. Among the roughly 600 applicants he was one of the 30 that were accepted.

-Getting accepted by this academy is not easy. Would you say that your yoga and meditation practice helped you ?

I cannot be sure of that, but yoga certainly made me more sensitive to art. The energy I got from yoga and the persistence I acquired from Janakanandas training helped me to focus and stay motivated during the preparation.

-When it comes to your work as an artist what role does yoga and meditation play?

-What about when you are teaching? I get many ideas myself when I am teaching, Janakananda said the same thing and I have heard it from others as well.

Yes, that happens also. But I particularly get it from my own practice.

Carsten recalls his earliest memory of how a motive rose from his subconscious and became a painting. It was in 1994 when he attended the folk high school. He woke up at four in the morning with a clear idea of a painting in his mind. He quickly sketched it down and went back to sleep. The morning after he started to work on a painting based on the sketch and it turned into one of his strongest works yet. 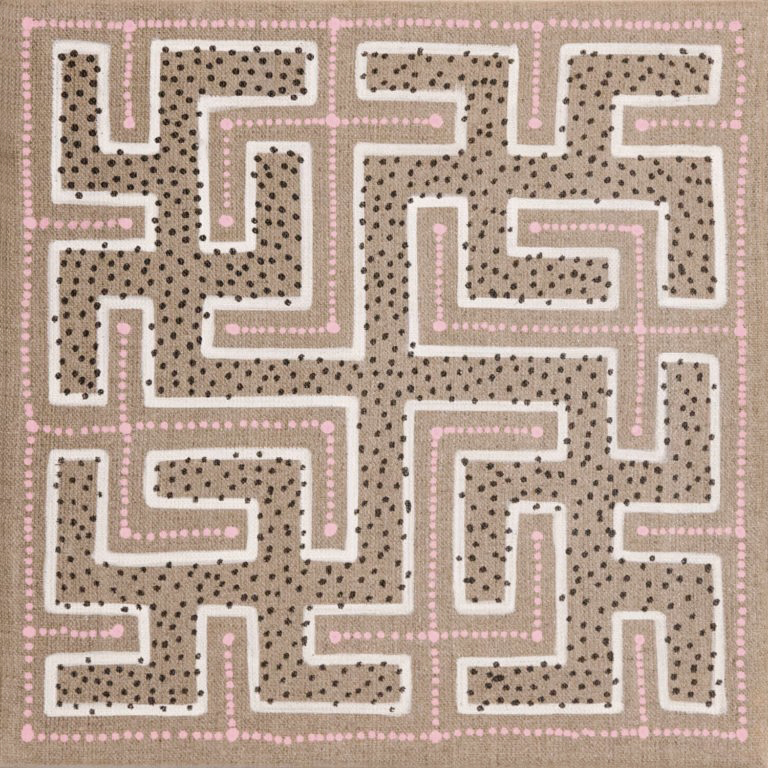 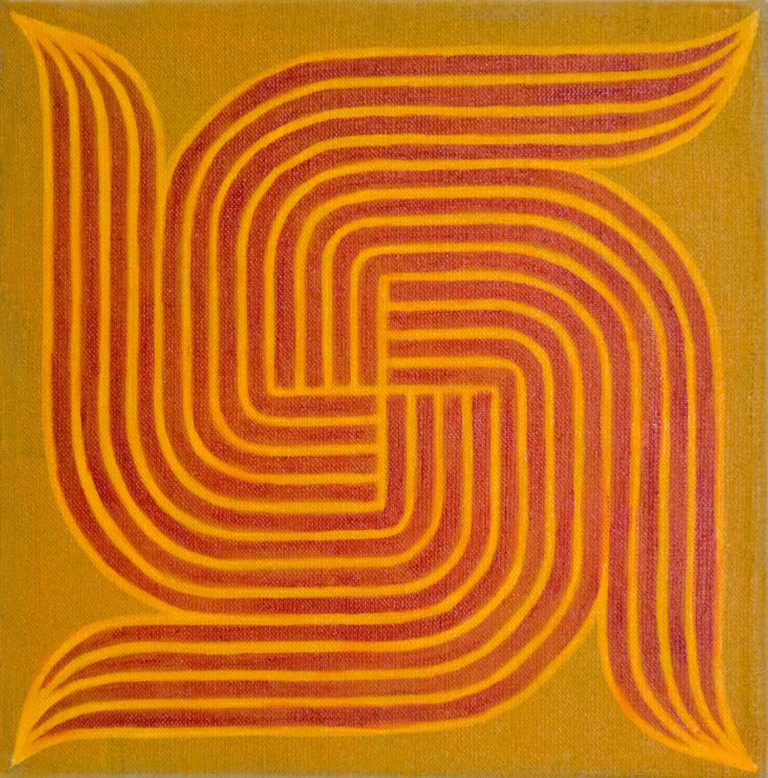 -Do you think that any spiritual insights that you have acquired through your sadhana are expressed in your art ?

I do not like to use the word spiritual. It easily becomes too wishy-washy for my taste. On the other hand the concept of energy speaks to me. I experience this in myself and in others and I feel that there is some sort of vibration or energy in shapes and forms that have an influence on us.

The works of Rothko for example are powerful and they exert some kind of emotional influence. There are symbols, like the cross, the circle and the swastika that touches me deeply.

I remember the many times after morning practice i Håå when we with our senses sharpened by practice left the yoga room while observing silence, to drink morning tea in the dining hall. When I saw the paintings on the walls they touched me. It was like they were alive and radiating. Carsten tells me that he also was inspired by the art that Swami Janakanada exhibited in the ashram.

-Are there any particular artists who have inspired you ?

I could name Mark Rothko, Paul Klee, Sohan Quadri and Frans Klein, who by the way was inspired by zen buddhism. Color field and abstract impressionism like Frank Stella also inspires me.

Minimalism also affects me as an expression but not so much the philosophy behind it. Furthermore I am touched by the art of indigenous people and ritual art, for example from tantra.

Holy geometry and natural geometry, like fractals, are other sources of inspiration. The golden mean and the Fibonacci sequence which is recurring in nature, the patterns on animals, all this fascinate. It points to something that we cannot express in words but that has to be understood intuitively.

I could connect this to a question you asked earlier about the connection with my art and deeper states accessible through meditation. In meditation visions of fractals and spirals sometimes occur for me.

Carsten lives in Nørrebro in Copenhagen with his wife and two daughters. He has his workshop a walking distance from his home. He still works as a yoga and meditation teacher at the Scandinavian Yoga and Meditation Schools center on Købmagergade where he guides a few sessions every week.

-I have followed your evolution as an artist since you left the yoga school. In the beginning I had the impression you were seeking. Do you feel that now after a few years as a professional artist you are starting to find your own style ?

My understanding has developed and I am happy about my field of work. On the preparation course I was encouraged to make figurative paintings to get in to the the academy. I stayed with the figurative for a while but it was problematic for me because I had to base my works on photos and I did not know what I wanted to express with them. I was more interested in colours and forms and dream language. I wanted to go back to the abstract.

So what do you want to express with your abstract art ?

Some of these paintings I see as what I would call “power markings” (kraft tegn in Danish). This naturally relates to yoga. Signs and colour together amounts to more than the sum of the parts.

When I paint, I think primarily of the effect of seeing my art rather than a meaning, I want my art to influence those who see it in a positive way and leave an impression, and I test it on myself. There should be both power and balance, just like with yoga.

A selection of Carstens Caroc Crone’s art will be exhibited at Yoga & méditation Paris on the 18th and 19th of may 2018.

You can find out more about which cookies we are using or switch them off in settings.

This website uses cookies so that we can provide you with the best user experience possible. Cookie information is stored in your browser and performs functions such as recognising you when you return to our website and helping our team to understand which sections of the website you find most interesting and useful.

Strictly Necessary Cookie should be enabled at all times so that we can save your preferences for cookie settings.

If you disable this cookie, we will not be able to save your preferences. This means that every time you visit this website you will need to enable or disable cookies again.